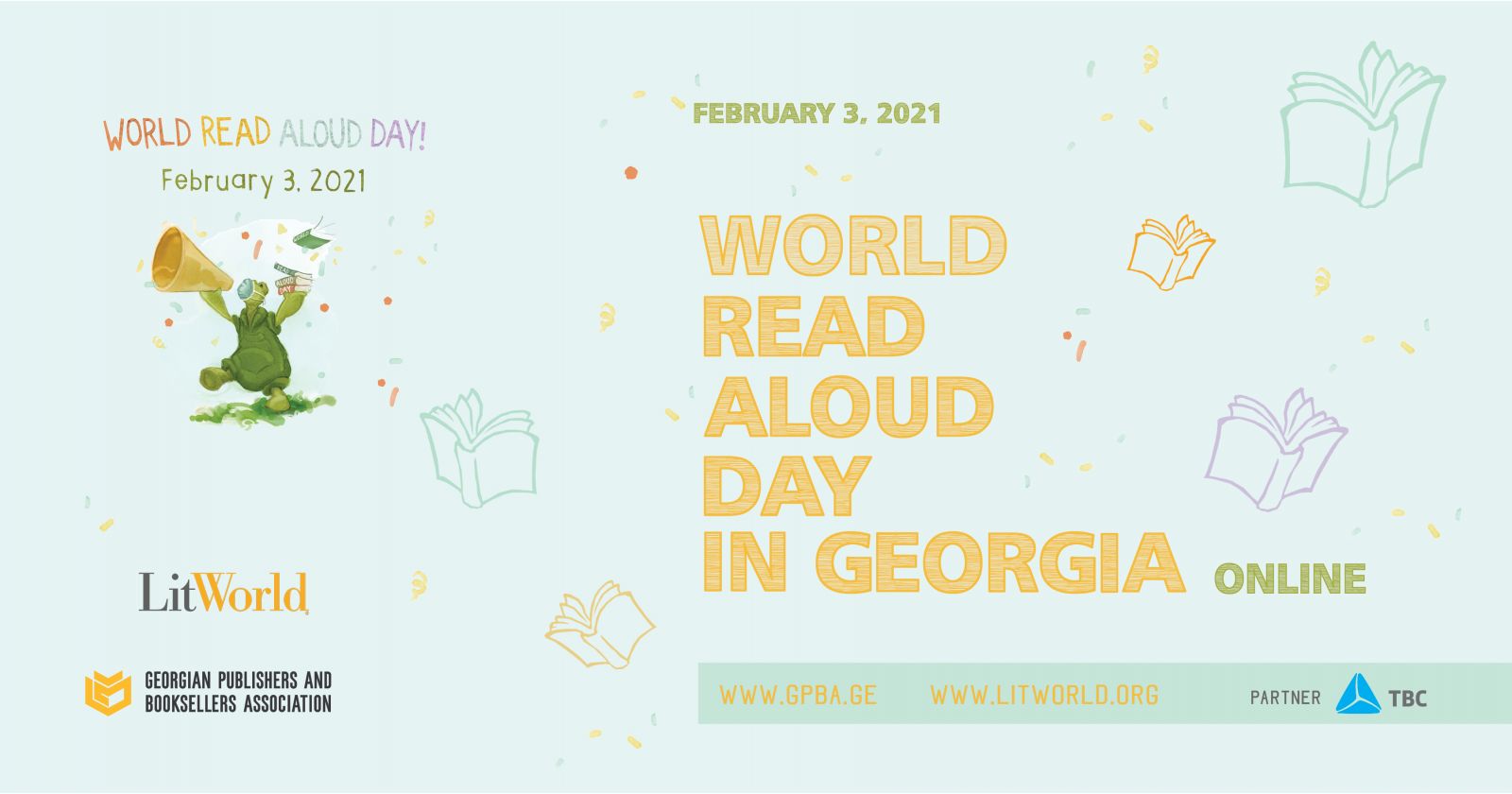 Read Aloud. Change the world – with these words, on February 3, along with 30 million people from 100 countries all over the world, Georgia once again joined the famous World Read Aloud Day. Since 2016, It’s Georgia’s sixth time joining an event of such a great scale, with the initiation of the Georgian Publishers and Booksellers Association. Authors, publishers, illustrators, translators and  readers were all united to celebrate books and the joy of reading aloud.

The World Read Aloud Day is internationally presented by global literacy nonprofit organization LitWorld. Local partner of the project is TBC Bank which has awarded all the students and participants joining the live readings and online meetings planned throughout the day with free access to the Saba Digital Library.

Due to the pandemic, this year's event was held online. The opening event which was streamed online and accessible to watch for everyone everywhere, was dedicated to the eminent Georgian philosopher, translator and writer Bachana Bregvadze, who would have turned 85 years old in 2021. Georgian writers Dato Turashvili, Zviad Kvaratskhelia, Giorgi Kekelidze, and Gvantsa Jobava talked about his work, read excerpts from Miguel de Cervantes' "Don Quixote", as translated by Bachana Bregvadze.

Moreoever, throughout the day, around 70 Georgian writers held online meetings in over 65 schools, universities and other educational institutions across Georgia, read literary texts with students, and re-emphasized the importance of literacy.

The closing event for WRAD was held in the evening, which included a discussion by translator Khatuna Tskhadadze, philosopher Levan Gambashidze and poet Paata Shamugia on the topic "Man and the State: Challenge and a Way Out". As per tradition, the speakers reviewed the socio-political topics of the past year, discussed the current challenges in Georgia, as well as future perspectives in the context of human-state relations, and talked about literary analogies. At the end of the conversation, literary texts were read aloud.

The closing event was concluded with the traditional reveal of Book Supporter of the Year.

Georgian Actress Nino Kasradze was awarded with 2021 Book Supporter of the Year prize. Georgian Publishers and Booksellers Association Chairperson, Rusudan Mosidze and Executive Director, Tinatin Beriashvili presented the actress with the award over the distance.

Nino Kasradze was awarded the prize of the Book Supporter of the Year for her significant and exceptional contribution to the modernization of the book and film/theater and for searching for new means of promoting book reading. Over the years, the famous actress held numerous meetings aimed at presenting, popularizing Georgian and foreign literature and stimulating interest in book reading among the young. Nino Kasradze was constantly involved in promoting classical and modern Georgian poetry across the country, planning and performing theatrical evenings of Georgian poet and artist Esma Oniani. The actress has actively participated in informational campaigns and projects supporting the book sector.

In 2018, Nino Kasradze, in cooperation with the Georgian Publishers and Booksellers Association, initiated the project "Actors for Literature", within the framework of the Tbilisi International Book Festival.

The annual award was first established by GPBA back in 2016 to recognize and acknowledge people, projects, or institutions that contribute to the spread of literacy in Georgia. In order to become the recipient of the award, a person or organization shall not be employed in the book sector, i.e. promoting the given sector shall not be their direct professional duty. In the previous years, the Book Supporter of the Year award was given to "Tsignebis Taro" (2020) - a literary gameshow for high-school students, Businessman Mamuka Khazaradze (2019), Film Director Temur Chkheidze (2018), Broadcasting & media production company Formula Creative (2017), Parlamentarian Levan Berdzenishvili (2016).